Current state of the studio, below. The big Serge triple-decker XL box in the top photo was finished in the first months of 2020 and I picked it up in June last year. I’ve been working on it intensively since I got home and I’m just recently feeling strong on it. I managed to not buy any gear during the pandemic (uh, except that Blippoo Box…) but recently broke that streak. New stuff still in transit but its advent perhaps may signal a whole new direction for djll musik. Spoiler alert: SPECTRAL RESYNTHESIS. ‘Nuff said. 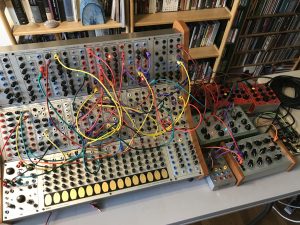 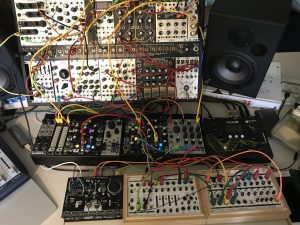 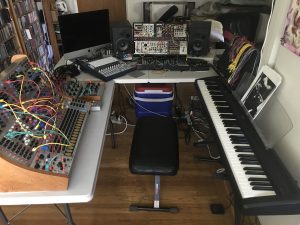 In August 2020 I began a 13,000 mile road trip in a borrowed 24 foot RV, visiting family and friends and playing with people; all told, about 20 sessions in four months — which is respectable for such extreme times. Musical friends (some new) included Ross Rabin, Jay Kreimer, Miguel Frasconi, gabby fluke-mogul, Andrew Raffo Dewar, LaDonna Smith, Rob Cambre, and Donald Miller. September through half of December. Washington state, Colorado, Nebraska, Wisconsin, Kentucky, New England, New York, Georgia, Florida, Louisiana, Texas, Arizona… and back to California finally. The whole story is on my non-musical blog, Mutootator and Friends. Scroll down to the August 24 entry for the earliest post about the trip.

Euphotic managed to play one of the first live gigs in post-lockdown San Francisco a couple of weeks ago, at Canessa Gallery. Video here.

Euphotic’s new album came out last winter, YAY. And also the new one from Kokuo, BRITTLE FEEBLING, which you can find on Bandcamp. Which you should find, and purchase. Both scooped up a ton of nice reviews. I’m extremely happy with both these recordings. Tender Buttons‘ new album is not out quite yet, but soon. Like the first, it was recorded at Fantasy Studios in Berkeley, California — one of the last sessions done in that storied location, if not the very last.

I included a cut from that Tender Buttons unreleased recording in the set of music I shared with Mike Watt for his WATT FROM PE!DRO internet broadcast, which goes live today as I type. It’s three hours of music from djll and some other nobodies like John Coltrane, plus interviews. You can learn all about why I’m afraid of pigs (the four-legged kind) but not afraid of Captain Beefheart. (Photo of me hammering trumpet notes into the floor by Lenny Gonzalez!)

This entry was posted in Music. Bookmark the permalink.