cassette 19  (MUSIC TO LISTEN TO SOUND BY) 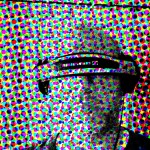 Sound or structure? When dealing with the creation of abstract music, music that does without mass-market arbiters of “what music is supposed to be,” the sound vs. structure choice has set the terms of the debate for too long. Re-introducing bits of melody, rhythm, and harmony back on to the fighting stage makes the two S v. S warriors — let’s visualize them as Cage and Boulez, just for giggles — drop their gloves, turn to the listener and say Huh? Relax, it’s “extended techniques for drum ’n’ bass.” It’s stochastic processes applied to field recordings of mic drops. Circuit-bent trumpet and hooked-up-wrong electronics. So the fight to the death between sound and structure is a draw, and we drag the damaged bodies off the mat and make use of their richer, bruise-marked surfaces for further experimentation.

The stuff you’re listening to was composed, using a variety of means, as an attempt to put to rest some demons that have been interrupting my sleep for the past few years. These fuckers inhabit a physical zone somewhere between electronic circuits and the circuit of air that is blown through a trumpet. Their ideas are lobbed back and forth over the bleachers that dot the lands of “static systems” and “chaotic systems.” But mostly, the critters on these tracks hate the idea of ideas as the main motivation for creating and enjoying sounds. Mostly the agreements that are perforce negotiated are “self-sabotaging systems,” preferring to stalk the liminal edges of perceptible rhythm, melody, harmony, and all that music shit, rather than march with the ranks of forced coherence brought on by machines and their baton-twirlers. The game’s up, already. Before that broken place becomes defined and genre-fied, FILL ALL AVAILABLE SPACE WITH YOUR NOISE.

a1.) (punktuated equilibrium) uses sounds from circuit-bent FM synthesis devices, plus some analog shaping and distant trumpet. It was undertaken as an investigation of the idea of punctuated equilibrium — it heaps dirt on the listener’s expectations.

a2.) (tempi slam 3) is the dub remix of the hit single, which was never issued.

a3.) (schlagstimmung) is the first of a few pieces here where the trumpet was recorded through Nick Collins’ CONCAT algorithm running on a non-FBI-probed iPhone; analog synthesis sounds are brought in to cheer it along on its journey into the outer wastelands of brass technique. In this piece the trumpet is masked in the mask of the percussion section.

a4.) (beater-fibonacci) is dedicated to the master composer, performer and instrument maker David Tudor. It was generated exclusively by a vacuum-tube driven feedback circuit similar to those Tudor constructed and used in his series of “Rainforest” pieces. One track was recorded, then folded backwards on itself twice, resulting in a piece a quarter of the original length and four times its original depth. I then inserted a “discontinuity” at the Fibbonacci point, in an attempt to secure a foundation grant because they need Big Ideas to justify dispensing money responsibly. Having failed to get the grant, the piece reverted to its primal nature and was finally devoured by its babies, who pop up here and there in other tracks.

a5.) (ghost dub) came about through the agonies of a circuit-bent Yamaha Keytar (ca. 1985)

a6.) (bungle jungle) also uses the CONCAT app and a circuit-bent rhythm section.

b2.) (new harsh izzik) was submitted to, and rejected by, the San Francisco Tape Music Festival because it wasn’t tape-music-y enough and too “trumpet and electronics” sounding. It has little else to recommend it, except maybe the fact that there’s a lot of Esquivel-style panning in it. Turn up your hi-fi system, light up a cocktail, and, since you are a single man living in your mom’s basement without a girlfriend to seduce to these sexy sounds, sit back and watch the cats run out of the house!

b3.) (doobyaxl) features a circuit-bent Casio SK-1 — kind of the Old Testament for benders. And putting up similar-sounding extended trumpet sounds as a comparison shopping window alongside electronic sounds would be a pretty thin compositional strategy, so let me emphatically say THAT’S NOT WHAT’S GOING ON HERE.

b4.) (click monster) is another static system that’s always changing, using classic analog synthesis techniques (including the vacuum-tube circuit used in (a4) and the wonderfully unreliable phase-locked loop) to generate a forest of clicks and quacks which are then run through two parallel but different granular synthesis algorithms, one for each left and right channel.

b5.) (gutbucket) is a 12 bit sampler-driven improvisation. 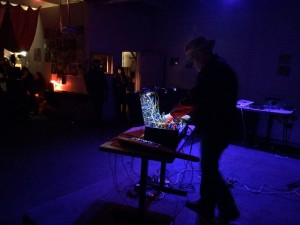 Most of 2015 is by the boards now, it being October 1. Right now it seems the whole Bay Area scene is going cracko for silent movie accompaniments by weirdo musicians. One of these is led by Joe Lasquo and features Tom Nunn, Beth Custer, David Michalak, Jorge Bachmann, and me. The film is Dziga Vertov’s Man with A Movie Camera. We did it on Sept 22 at PianoFight and we’re doing it again down the street at Center for New Music on October 4. The other movie accompaniment I’m down for was put together by Tania Chen and Ben Tinker. It’s all electronic and the film is the classic METROPOLIS. Players include, besides me and the two organizers, Laetitia Sonami, Jeanie Aprille Tang and Josephine Torio. Tender Buttons is busy this fall, with one performance every month from August on through December. We did the 14th Outsound Festival with video artist Bill Thibault. The show we did last week at Tom’s Place will be stuck forever on a shiny cloud in my Heaven of Best Gigs Ever. We did a revival of my piece INTERMINACY (for electronics and “lost” John Cage stories) in August at the Octopus Literary Salon in Oakland, and are planning an expanded version for 2016 with NEW STORIES!!! Oh, and we recorded at Fantasy last April and are putting the finishing touches on an LP from that session. Lots of things in the works for Tender Buttons. The same can be said for Beauty School, which plays the Norcal Noisefest 2015 this coming Saturday October 3. And we have way too much material for a new release that we’ve been tussling over since last spring (Released on Eh?Records as . The band just keeps evolving and getting warmer and noisier. The other Big News from 2015-16 is my re-entry into modular synthesizer playing, with a major cash drainage following in its wake. Do I dream of wires? No need, I own plenty of ’em now. A number of solo electronics shows went down since last November, at least 3 of them at Robotspeak in Lower Haight-Ashbury. Many new friendships and opportunities have arisen since the voltages started controlling me. Other highlights of the past year were a quintet with UK improvising bassist Dominic Lash at VAMP in Oakland, work with dancer Christine Bonansea Saulut, more duos with Julia Mazawa, Beauty School tours to SoCal and PNW, and continuing involvement with Jacob Felix Heule’s Doors That Only Open In Silence series at Temescal Art Center, a super community-building thing.

2014 has been interesting so far, with the real goodies to come (isn’t that always how it seems?). Started off with a bang with the visit of Jack Wright and his son Ben. Jack and I go back a long way, to 1986 or so. It’s always a real kick in the pants to have him around. There’s talk of a tour on the East Coast in 2015… A lot of new players have been showing up. Karl Evangelista looped me into a project he calls Revenant, and he, Michael Coleman and Nava Dunkelman comprise three of the best improvisers I’ve ever played with. Turntablist Julia Mazawa invited me to drone with her on KFJC in May, and that led to another show at Berkeley Arts in July. I’m looking forward to further collaborations with Julia! Ritwik Banerji had me work with his software-based improviser he calls Maxine, the experience of which provided some inspiration for my new keyboard-based project, hackMIDI, which I’ve presented at Berkeley Arts and the Center for New Music and will be doing again at the upcoming Thingamajigs Festival in October 2014. Back in April I got involved with a group of dancers led by Christine Bonansea Saulut and we’ve been improvising together almost every Sunday since, at a great (so far private) space called the Starline Social Club. Other players have included Jacob Felix Heule, Suki O’Kane, Kanoko Nishi-Smith, Tim Perkis and Zachary James Watkins. Christine is in Berlin at the moment, but we’ll welcome her back on October 19 with a gig at Berkeley Arts… Almost by accident a new trio project called Bled Sorghum was formed for a set at LCM in Oakland (the hottest spot in town!) with Matt Ingalls and the legendary bran…(pos). We shattered, and we’re going to do it again in a couple of weeks at a new venue in Haight-Ashbury called Second Act, at a legendary address (formerly the long-running theater The Red Vic.). Grosse Abfahrt is slated for a reunion with the wonderful German trumpeter Birgit Ulher on September 27 at the aforementioned Center for New Music in SF, sponsored by sfSound… with some live previews the day before on the aforementioned KFJC radio station! … I’ve been playing tons of piano at home but nothing in public yet, but that may soon change. Tim Perkis introduced me to a world-class cornetist from LA, Dan Clucas. He and I have rehearsed a bit and planned a bit and on October 7, at Tom’s Place in Berkeley (another Tom, Duff, that is) we will finally debut our act, with me tickling the ivories in my eccentric, jazz-aware manner. Whew! Is that everything? Not quite… Beauty School has done some hair-raising gigs this year. We’re getting sharper and more focused but not any quieter. A cassette release is imminent, and to launch it we’re heading to the unsuspecting LA area in October. Our slogan is “Music can be avoided.” Catchy, ain’t it?

2013: This past year has been pretty good. Appeared with my first great inspiration and teacher, Roscoe Mitchell. Directed an improv orchestra featuring Vinny Golia, Phillip Greenlief, Ross Hammond, Randy McKean, and many others (both of those instances thanks a million to Tony Passarell). Grosse Abfahrt knocked ’em cold at the Chamber Music Day festival at SF’s Yerba Buena Center; then collaborated on an electronic zeppelin launch with Alfred 23 Harth and Torsten Müller, at the Center for New Music, a new, tightly-run venue, located in the seediest part of San Francisco.

So there you go, from the high to the low… anyway, last August (2012) I traveled to New York to play at The Stone with my esteemed partner-in-arms Tim Perkis (and with Andrew Drury, one of the busiest, most talented, and nicest guys in the business). In August ’13, as part of sfSound’s trumpet section, I got to participate in a night of celestial mind-blowing, opening for the Sun Ra Arkestra at the Victoria Theater (SF), where the line to get in was around the block — something one doesn’t often see for any kind of music these days, let alone out-music. In Sept ’13 I sat next to Vladimir Tarasov, the legendary Lithuanian percussionist, as part of a group assembled by Jon Raskin (we played this score shown on Jon’s home page!). Last but not at all least, a new trio with Jacob Felix Heule and Matt Chandler (Goddess Aphonic, Burmese) is now over a year in the birthing and starting to sound like a sound I’ve heard in my head since I was knocked over by Miles Davis’ Pangaea. The trio is called Beauty School and, no, we don’t have a website (see Links for music and vids). Our last gig of 2013 featured our guest Fred Frith.

It’s silly, but I have a more “traditional” blog called MUTOOTATOR and Friends, where I stick all kinds of fun and trivial stuff — writing, photos, memorabilia, art works, cranky observations, random jokes and thingies. It’s largely inactive as of 2014.