“The thing about all the extended techniques on trumpet is that such an approach is not new. There has been a certain sort of attention paid to Peter [Evans] and Axel Doerner and Taylor [Ho Bynum] and what they do is absolutely an individual thing, but it’s not coming out of a vacuum. I discovered when I got to New York that there were people like Greg Kelley and Tom Djll dealing with, if not the same language, at least the same idea of language as I was, and then to dig back, there are people like Wadada Leo Smith and Herb Robertson and Paul Smoker, all of whom were heroes for me in high school, and then you get to people like Ed Harkins and Toshinori Kondo (especially the early 80s stuff) that is absolutely alien…” — Nate Wooley, interview on Bagatellen, 2009

Tom Djll’s approach to playing the trumpet is more of an interrogation of professionalism sprung from a post-capitalist critique rather than an accumulated musical history. Although he had studied composition with AACM masters Roscoe Mitchell, Anthony Braxton, Leo Smith and others in 1979, at that moment Djll had barely taught himself brass rudiments. Inspired by punk and DIY approaches to performance and soundmaking (Trans Museq, PiL, The Contortions, Alterations, Eugene Chadbourne), Djll eschewed formal lessons in lieu of nearly fifteen years of blazing an idiosyncratic pathway through the instrument derived from his studiy and performance of analog electronic soundmaking. Working with a Serge Modular Synthesizer from 1981 until 1999, Djll described his trumpet expressions as products of an “analog lip synthesizer,” among other colorful epithets.

Working with American free improvisation pioneers such as Ross Rabin (Scree-Run Waltz), J.K. Randall (Princeton University, Inter/Play), and Doug Carroll, by 1985 Djll had become fully committed to an approach to music making less soundobject-production-oriented than situationist: each performance iteration a hothouse creature grown out of its own spontaneously composed rules and languages, challenging not only the audience but the performers to radically re-frame settled concepts of temporality and causation. Many gigs appropriated an outrageously explicit political-performative practice, taking apart the contemporary discourse and the barking media. Djll broke off this approach in 1986 and traveled to Europe for a good chunk of 1987, re-assessing, and busking with a noteworthy avoidance of commitment.

In 1989 Djll’s trumpet+electronics breakthrough was realized with the recording of TOMBO, using the Serge system’s endlessly disruptive causation chains to process, feedback-process, and process-feedback trumpet and mouth sounds into a noise-body-without-organs, the rhythm of breathing constantly modulated by fingers jumping back and forth between valves, knobs and patch cords. TOMBO was subsequently published by ReR Quarterly, along with Djll’s essay “Synthesizer + Improvisation = Impossible?” (RéR Quarterly Magazine, 3/3. 1991, London: November Books: 12-15. ISSN·0954·8807) Djll’s collection Bootstrapping was named “Cassette of the Month” by EAR Magazine in 1991. Encouraged by this ringing endorsement, in 1993 Djll self-published MUTOOTATOR, the scintillating apex of his trumpet/Serge development. This set of improvised duets used a hybrid analog/digital live sampling and processing system (the “Mutootator”) of Djll’s own design, and featured William Winant, Tom Nunn, Jack Wright, Myles Boisen, and many others. MUTOOTATOR is recognized as a classic of improvised electroacoustic music. (Dan Warburton, 2006, Paris Transatlantic; Richard Kadrey, Covert Culture Sourcebook 2.0; Brian Marley, The Wire)

1991: Djll had his brain re-wired by Pauline Oliveros at one of the first Deep Listening Retreats at Rose Mountain in New Mexico. In 1993 Djll entered the graduate program at the Mills College Center for Contemporary Music on a full assistanceship (while obtaining his black belt in aikido and working a graphic design job). During this period he entered into a course of legitimate trumpet study with Jay Rizzetto. His activities were heard by faculty member Chris Brown, who used Djll’s trumpet noises on his ferociously difficult LAVA (for brass, percussion, and electronics, released in 1995 on Tzadik). Djll continued working with Brown in live performances of LAVA and other works (Brown, DUETS, Artifact 1016, 1996) as well as other Mills faculty (William Winant, Alvin Curran, John Bischoff) and eminent visitors to the school such as James Tenney, Bun-Ching Lam, “Blue” Gene Tyranny, Tim Perkis, and Pauline Oliveros (with whom he had studied in 1990). In 1999, Djll sold off the Mutootator, citing a need to “spend more time with my family.”

Djll first encountered the “reductionist” wave in improvised noise-art in 1997, performing with nmperign in Aptos, California. Djll went on to appear on the critically hailed Signs of Life with Bhob Rainey and Jack Wright in 2000, subsequently touring with Wright in 2002 and Wright and Rainey in 2004 (immortalized on Road Signs, Soul on Rice Prods SRPD04, 2007 – “Essential listening for anyone following the micro-micro end of the current improv scene.” – Cadence). Around 2001 Djll began writing about music with what might be called a vengeance, publishing in The Wire, Musicworks, Signal To Noise, and News of Music. Djll contributed to the premature demise of online publications One Final Note and Bagatellen, and was flamed out of IHM (just hours after joining) for his commonsense views on the insufferable preciousness of much of what the kvetchers were then calling “lowercase” — subsequently “eai;” and, today, “yesterday’s news.”

Since forming the supergroup Grosse Abfahrt in 2004 (with Gino Robair, John Shiurba, Tim Perkis and Matt Ingalls) the combo has been lauded for its collaborations with Serge Baghdassarians/Boris Baltschun (on Creative Sources), Lê Quan Ninh/Frédèric Blondy, and Mathieu Werchowski/David Chiesa (on EMANEM). A splinter group of this project is Kinda Green, a feisty duo with computer network pioneer Tim Perkis. From 2004 to 2010 they refined their John Cage tribute act, INTERMINACY, and were finally rewarded with a controversial appearance at the 2011 San Francisco Electronic Music Festival. The duo’s 2007 self-titled release generated international raves, huzzah! “…you’d have to file this under “EAI” – the album’s stately 22-minute closing track “sagebrush drip kyrie” certainly wouldn’t be at all out of place in the Erstwhile catalogue – but it’s a darn sight more sprightly and playful than most of the oh-so-dour stuff that excites the punters over at IHM. Then again, since when did EAI have to be all dreary drizzle?” — Dan Warburton, Paris Transatlantic 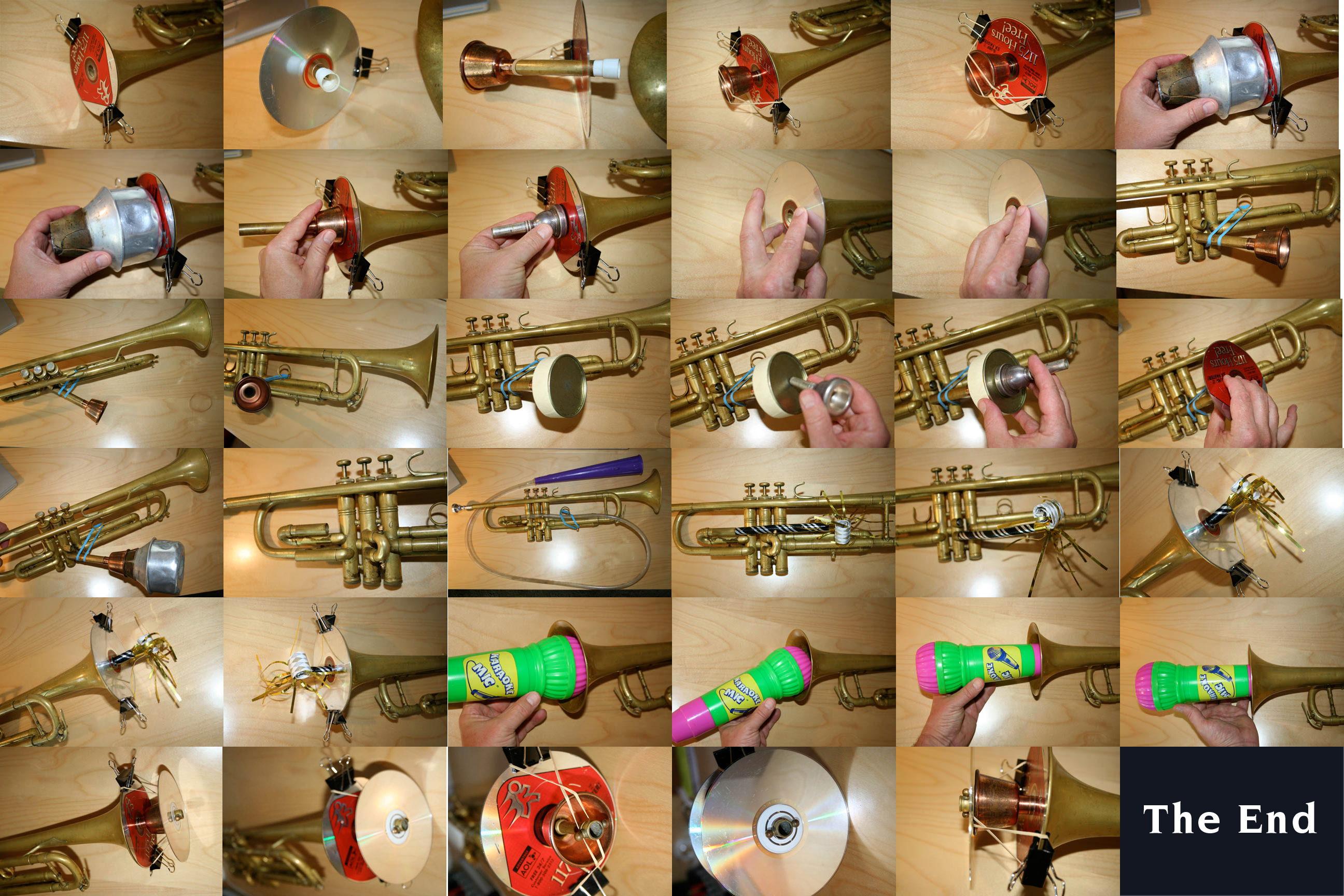 Deep into the new millennium, Djll’s resolutely nonprofessional performance practice has centered itself in live instrument re-building, wherein the trumpet’s identity is broken down and reassembled onstage, using bits of plastic tubing, rubber bands, whistles, squeakers, toys and other horn parts. More recent performances have seen the re-entry of actual electronic sounds into the language. The festering soundworlds arising from this gallimaufry of resonator/muters suggest a parade of chancy characters; Djll (a professional namer in daylight hours) gives them monikers such as Whirly Honkblatter, Zeppelin Launch Simulation Drone, the Nude Rubberlips Orgasm Chanter, and the Dissociative Tubular Identity Disorder Scalar Ambiguation Horn. Djll self-published a CD of trumpet solos, Bellerophone, in 2007, along with SMUDGE, re-examinations of the trumpet+electronics problem, on his Soul on Rice label.

Djll’s 2012 formation of the freenoise band Beauty School (with Matt Chandler and Jacob Felix Heule) marked a new phase of his trumpet development, re-integrating electronics and situating the whole in a sonic environment uncompromisingly hostile to brassplaying heroics. Djll describes the amplified/distorted trumpet contributions as “sound clumps.” Scabrous in texture, spasmodically timed and placed, sound clumps are specifically crafted with the aim of blocking the major arteries of audiences’ expectations for melody, gesture, and thematic development.

Fanatics of rarefied scratch trumpet will flip over Djll’s work with the quartet KOKUO, whose 2020 recording BRITTLE FEEBLING showcases to best advantage his wide-ranging extended brass soundings in a purely acoustic setting. “Good, tough improv—spiky and uncomfortable here, almost—almost—calm and expansive there, active and needle-sharp while allowing air into the room.” – Brian Olewnick

In June 2021 Djll appeared on the Watt From PEDRO! webcast, interviewed by Mike Watt and playing greatest hits from the entire span of his checkered career (except his early years in Taos, playing ragtime for silent films).